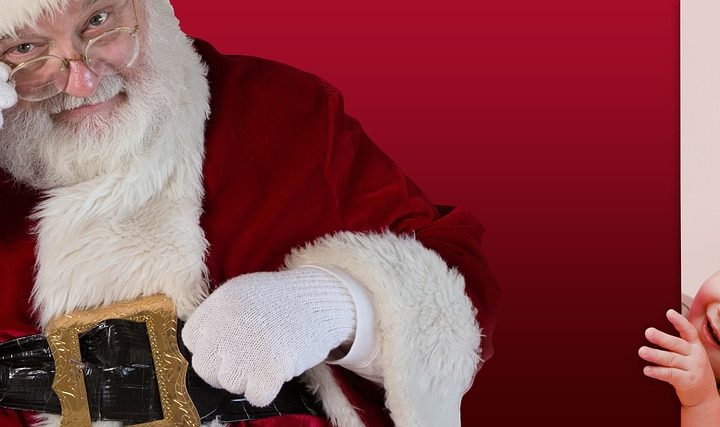 “The beloved image of Santa Claus as a fat, jolly, bearded old man derives from St. Nicholas, an austere-looking 4th century Christian [Catholic] bishop of Asia Minor, who was noted for his good works. The idea of GIFT GIVING associated with this Saint spread from Asia Minor to Europe, and was brought to the United States by early Dutch settlers.  The American writer WASHINGTON IRVING contributed to the concept of St. Nicholas as a laughing holiday figure, and in 1822, CLEMENT MOORE composed his ‘Visit from St. Nicholas’ (” ‘Twas the night before Christmas“) with its noted description. But the image of Santa in fur-trimmed dress that ultimately captured the imagination was drawn in the United States by the cartoonist THOMAS NAST in 1863.”

THOMAS NAST was a young German artist who in December 1862 produced his first Santa drawings for “Harper’s” magazine as a combination of holiday cheer and somber reality. The figure Nast drew was radically different from the way Santa had been thought of by the public up until this point. At the time, Santa was often portrayed as short and lean, with a sharp clean-shaven face, looking more like an evil demon than a benevolent gift-giver.

Nast felt that Santa was someone who should be beloved by children – not feared. So he created the jolly old elf of his imagination. He drew a sturdy Santa, wearing a wreath of holly, smoking a long clay pipe. The Santa envisioned by Nast was almost always smiling, surrounded by a whole herd of reindeer, pulling his sleigh. The artist also popularized the tradition of hanging stockings by the fireplace for Santa to leave gifts in.  In 1866, Nast produced 20 Christmas scenes for Harper’s, giving Santa some of the attributes that have been associated with him since. Among these, a record book with the names of good and bad children, a telescope for checking up on the behavior of the children, and a workshop, where he was shown making toys. The drawings were in black-and-white, but when Nast was asked to reproduce them for a colorful book, he made Santa’s suit bright red. From this day forward, Santa Claus has always worn a red suit.