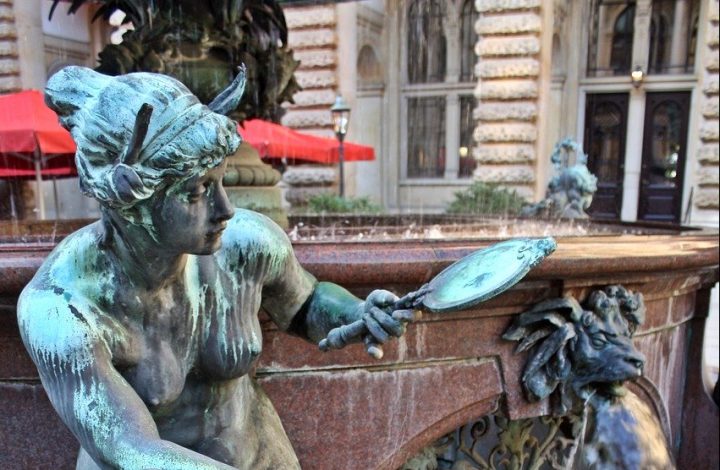 Echo was a beautiful nymph, fond of the woods and hills, where she devoted herself to woodland sports. She was a favorite of Diana, and attended her in the chase. But Echo had one failing; she was fond of talking, and whether in chat or argument, would have the last word.

One day Juno was seeking her husband, who, she had reason to fear, was amusing himself among the nymphs. Echo by her talk contrived to detain the goddess till the nymphs made their escape. When Juno discovered it, she passed sentence upon Echo in these words: “You shall forfeit the use of that tongue with which you have cheated me, except for that one purpose you are so fond of—reply. You shall still have the last word, but no power to speak first.”

This nymph saw Narcissus, a beautiful youth, as he pursued the chase upon the mountains. She loved him and followed his footsteps. O how she longed to address him in the softest accents, and win him to converse! but it was not in her power.

She waited with impatience for him to speak first, and had her answer ready. One day the youth, being separated from his companions, shouted aloud, “Who’s here?” Echo replied, “Here.” Narcissus looked around, but seeing no one, called out, “Come.” Echo answered, “Come.” As no one came, Narcissus called again, “Why do you shun me?” Echo asked the same question. “Let us join one another,” said the youth.

The maid answered with all her heart in the same words, and hastened to the spot, ready to throw her arms about his neck. He started back, exclaiming, “Hands off! I would rather die than you should have me!” “Have me,” said she; but it was all in vain. He left her, and she went to hide her blushes in the recesses of the woods.

From that time forth she lived in caves and among mountain cliffs. Her form faded with grief, till at last all her flesh shrank away. Her bones were changed into rocks and there was nothing left of her but her voice. With that she is still ready to reply to any one who calls her, and keeps up her old habit of having the last word.

Narcissus’s cruelty in this case was not the only instance. He shunned all the rest of the nymphs, as he had done poor Echo. One day a maiden who had in vain endeavoured to attract him uttered a prayer that he might some time or other feel what it was to love and meet no return of affection. The avenging goddess heard and granted the prayer.

There was a clear fountain, with water like silver, to which the shepherds never drove their flocks, nor the mountain goats resorted, nor any of the beasts of the forests; neither was it defaced with fallen leaves or branches, but the grass grew fresh around it, and the rocks sheltered it from the sun. Hither came one day the youth, fatigued with hunting, heated and thirsty.

He stooped down to drink, and saw his own image in the water; he thought it was some beautiful water-spirit living in the fountain. He stood gazing with admiration at those bright eyes, those locks curled like the locks of Bacchus or Apollo, the rounded cheeks, the ivory neck, the parted lips, and the glow of health and exercise over all. He fell in love with himself. He brought his lips near to take a kiss; he plunged his arms in to embrace the beloved object. It fled at the touch, but returned again after a moment and renewed the fascination.

He could not tear himself away; he lost all thought of food or rest, while he hovered over the brink of the fountain gazing upon his own image. He talked with the supposed spirit: “Why, beautiful being, do you shun me? Surely my face is not one to repel you. The nymphs love me, and you yourself look not indifferent upon me. When I stretch forth my arms you do the same; and you smile upon me and answer my beckonings with the like.”

His tears fell into the water and disturbed the image. As he saw it depart, he exclaimed, “Stay, I entreat you! Let me at least gaze upon you, if I may not touch you.” With this, and much more of the same kind, he cherished the flame that consumed him, so that by degrees he lost his colour, his vigour, and the beauty which formerly had so charmed the nymph Echo.

She kept near him, however, and when he exclaimed, “Alas! alas!” she answered him with the same words. He pined away and died; and when his shade passed the Stygian river, it leaned over the boat to catch a look of itself in the waters. The nymphs mourned for him, especially the water-nymphs; and when they smote their breasts Echo smote hers also. They prepared a funeral pile and would have burned the body, but it was nowhere to be found; but in its place a flower, purple within, and surrounded with white leaves, which bears the name and preserves the memory of Narcissus.