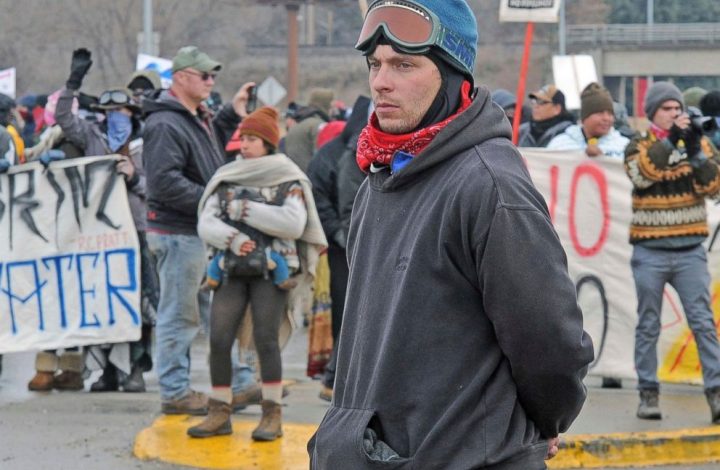 For many Native Americans pushing to block construction of the controversial Dakota Access Pipeline near the Standing Rock Sioux Tribe’s reservation in North Dakota, Thanksgiving Day serves as a reminder of centuries of broken promises.

About 300 people demonstrated against the pipeline in Mandan, North Dakota, on Thursday, according to The Associated Press, capping off the night with an “Appreciation Dinner” served by actress Jane Fonda and others.

About 50 police officers stood across from the protesters, and the crowd eventually dispersed. At least one demonstrator was arrested, reported The AP.

“Given what we are currently fighting against, Thanksgiving is not really a celebration for us,” Dallas Goldtooth, a Native American activist on the ground in Cannon Ball, North Dakota, told ABC News Thursday.

The 1,172-mile crude oil pipeline has been embroiled in controversy for months, and hundreds of Native American and environmental activists are camped out near the Standing Rock Sioux Tribe’s reservation in protest of the pipeline. They argue that construction of the pipeline threatens the local water supply and traverses culturally sacred sites.

The CEO of Energy Transfer Partners, the company behind Dakota Access Pipeline, wrote in an internal memo to staff in September that “concerns about the pipeline’s impact on the local water supply are unfounded,” and that “multiple archaeological studies conducted with state historic preservation offices found no sacred items along the route.” Broken Promises: Why Treaties Matter to the Standing Rock Sioux
Leader of the Standing Rock Sioux Tribe Calls On Obama to Halt Pipeline After Violent Clash
Why a Previously Proposed Route for the Dakota Access Pipeline Was Rejected
Goldtooth added that the holiday brings back a dark part of history for many Native Americans, and reminds them of the struggles that their ancestors faced.

“What our ancestors went through 200 years ago, in a way we are kind of going through the same struggle. What is happening in North Dakota is just a mere continuation of 500 years of colonization,” Goldtooth said.

“An important thing to remember is that this movement and that this resistance is not born out of hate for others, but out of love and celebration for our continuous existence,” Goldtooth said.

Goldtooth said that many of the activists, who call themselves “water protectors,” celebrated this at the dinner Thursday night.

Goldtooth added that in the coming weeks, activists are expecting scores of veterans to “deploy” to Standing Rock, in order to show support for the “water protectors.”

“They’re supposed to be coming over the next week or so. There has been a lot of support from veterans. It’s a pretty beautiful thing to see,” Goldtooth said.

Energy Transfer Partners announced last week that it filed for a court order seeking the right-of-way to finish construction of the pipeline without further intervention from the federal government. The latest legal move followed a statement from the U.S. Army Corps of Engineers that said it would delay issuing the final approval that the pipeline needs in order to complete construction in North Dakota, and invited the tribe to engage in further discussions.