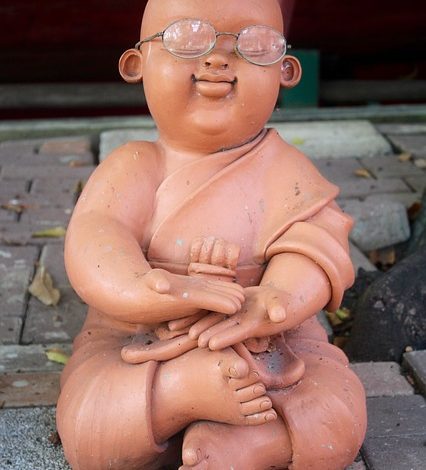 Kansas City is the home base for several big religious groups, like the Church of the Nazarene and the Community of Christ Latter Day Saints Church. But our city can also boast being the hometown of a saint.

The Self-Realization Fellowship, an international meditation group with roots in India, recognizes a late Kansas City business tycoon as one of its greatest yogis and spiritual masters. Alex Smith has the story of a man who made dollars by day and karma by night.

On a recent Sunday morning, about 40 followers gathered for a service of meditation, songs and readings at the Self-Realization Fellowship’s new chapel in South Kansas City. Front and center on the main altar are two pictures: one of Jesus and one of Krisha, representing an ideology that combines Christ’s teachings and Hindu yogic practice. The walls of the center are decorated with pictures of the SRF’s other important figures. Among the portraits of real and mythical saints and guru with beards and loincloths, one stands out. It features the smiling face of a white Kansas City businessman, the late James J Lynn.

“We’ve actually had people that have come all the way from India to visit his burial site in Kansas City” says local SRF member Doug Couch. “So amongst some devotees in the world of yoga and meditation and SRF, he’s considered a modern-day saint.”

Doug Couch and several members of the local Self Realization Fellowship have been working to uncover the lost history of James J Lynn.

In January of 1932, an ad in the Star announced that an Indian Swami would be speaking for several nights at the Athenaeum in Kansas City. Paramahansa Yognanda’s lectures on Indian spirituality had become a nation-wide sensation, and on the second night of his Kansas City appearance, millionaire businessman James J Lynn came to see want the excitement was about. Lynn later wrote that this evening changed his life.

“Yoganada gave brief instructions on how to sit properly for meditation – sit upright and sit very still, and James Lynn said for the first time in his life he realized that his hands were completely still, and that he was sitting completely still, and he thought this was a miracle cause he was always fidgeting all the time. And he looked up at the stage and Yoganada was looking right at him, and he could see light all around the stage, and he knew that he had found his spiritual teacher at that point.”

James Lynn made his fortune in insurance, as the head of both Lumberman’s Underwriting Alliance and Universal Underwriters. He also had major interests in oil and citrus fruit. But at age 40, after meeting Yoganada and taking up SRF practice, Lynn’s life found a new focus.

“Every morning when he would go to work in downtown Kansas City, he would have long periods of meditation in his office, and his secretary was instructed to tell people that he was in conference.”

James Lynn became close friends with Paramahansa Yognanda, and one of the guru’s greatest disciples. The SRF teaches that, through meditation, it’s possible for a person to attain a union with God. While this can typically take several lifetimes, James Lynn seems to have achieved it almost instantly. That’s why he’s referred to in SRF circles around the world as “Saint Lynn.”

“He became a complete saint in the traditional Indian definition of the term,” says local SRF member Randy Wolf. “In India, a saint is held to be someone who has achieved complete union with God, and James Lynn accomplished that in his life. And Yogananda said that his business accomplishments will soon be forgotten, but that his spiritual accomplishments will be remembered for hundreds or thousands of years.”

James Lynn started as kind of a weekend warrior, keeping his business and spiritual lives separate. But as he got older, Lynn spent more and more of his time with the SRF, and he eventually turned his business operations over to nephew Eugene in 1946. When Paramanhansa Yogananda died in 1952, James Lynn became head of the worldwide religious organization, though he decline to take over as guru.

“It was quite common when a spiritual leader passed that the spiritual title of guru would pass on to his chief disciple,” explains Doug Couch. “And there were some that were expected that James Lynn would be the new guru of SRF. And he stated that, no, that was not in the will of God at that time, that Yoganda was the last in line of gurus, and that from then on, they would promulgate the teachings – the original teachings – of Yogananda, and not try to teach them in any way, but try to keep them pure.”

When James Lynn died of pneumonia in 1955, both the Kansas City Star and the Times wrote extensive front-page tributes to Lynn, describing his business and philanthropic achievements. He had donated the Epperson House to UMKC and created a scholarship fund for the school. Lynn also donated a substantial addition of land to Swope Park. He had also given a million dollars in railroad stock to the SRF.

The Self-Realization Fellowship experienced a renaissance in the Aquarian years of the ‘60s and ‘70s and found a new champion in Beatle George Harrison. The current Kansas City group was also born in this era. It was started in 1978 by Donna-Marie Viene, who’s still an active member. Today, the SRF organization incorporates over 500 temples and centers in over 50 countries. In these SRF groups throughout the world, James Lynn continues to be revered, despite being more or less forgotten in his hometown.

“It really is an example of, no matter how successful you are in business, unless you name stuff after yourself, no one’s ever heard of – and he wasn’t interested in naming things after himself. So he’s probably, in the future is going to be more widely known as a yogi and as a spiritual figure, and he already is right in this current time.”

The Kansas City chapter of the Self Realization Fellowship opened its first-ever center in Kansas City in South Kansas City back in November. Members say that their new center has been attracting SRF visitors from throughout the Midwest.

This story was produced for KC Currents.