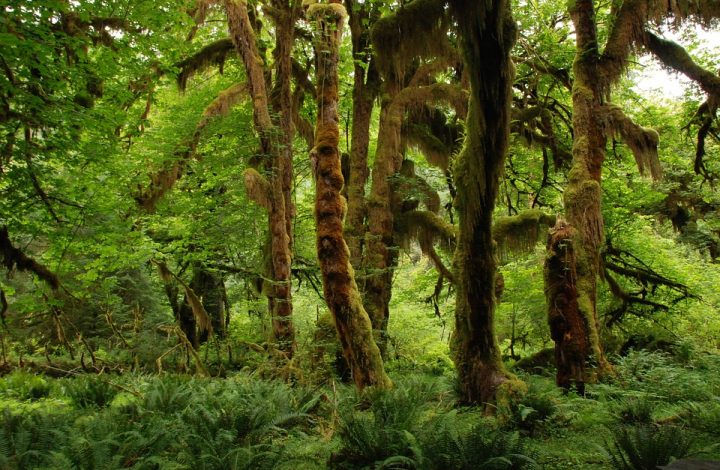 The region’s ecology is a product of 8,000 years of indigenous agriculture.
For more than a quarter-century, scientists and the general public have updated their view of the Americas before European contact. The plains and the Eastern forests were not a wilderness, but a patchwork of gardens, they’ve found. The continents were not vast uninhabited expanses but a bustling network of towns and cities. Indigenous people, we’ve learned, altered the ecology of the Americas as surely as the European invaders did.

Now, an expansive new study, published Thursday in Science and bearing the names of more than 40 co-authors, suggests that the human fingerprint can even be seen across one of the most biodiverse yet unexplored regions in the world, the Amazon rainforest.

For more than 8,000 years, people lived in the Amazon and farmed it to make it more productive. They favored certain trees over others, effectively creating crops that we now call the cocoa bean and the brazil nut, and they eventually domesticated them. And while many of the communities who managed these plants died in the Amerindian genocide 500 years ago, the effects of their work can still be observed in today’s Amazon rainforest.

“People arrived in the Amazon at least 10,000 years ago, and they started to use the species that were there. And more than 8,000 years ago, they selected some individuals with specific phenotypes that are useful for humans,” says Carolina Levis, a scholar at Wageningen University who helped lead the study. “They really cultivated and planted these species in their home gardens, in the forests they were managing,” she said.

That cultivation eventually altered entire regions of the Amazon, the study argues. Levis and her colleagues found that some of these species domesticated by indigenous people—including the brazil nut, the rubber tree, the maripa palm, and the cocoa tree—still dominate vast swaths of the forest, especially in the southwest section of the Amazon basin.

“Modern tree communities in Amazonia are structured to an important extent by a long history of plant domestication by Amazonian peoples,” says the paper.

Other cultivars remain successful, but they were so thoroughly changed by agriculture that they are no longer found in the forest at large. Peach palm, Bactris gasipaes, was domesticated to have fruits as large as 200 grams. In the wild, its fruits originally had a mass of only one gram. It still appears in gardens and small farms across South and Central America today. The ancient farmers and gardeners of the Amazon would likely have been speakers of languages from the Arawakan and Tupí families. They would probably have lived in “galactic” communities—groups of settlements separated by distance but linked by trade and communication—along the banks of the rivers that cross and irrigate the forest.

“Recent archaeological studies, especially in the last two decades, show that indigenous populations in the past were more numerous, more complex, and had a greater impact on the largest and most biodiverse tropical forest in the world,” said José Iriarte, an archeologist at the University of Exeter who was not connected to the study, in an email.

“This is the largest and more comprehensive study” to reveal that influence so far, he added. “It is is very sound, since it not only includes archaeologists (which have been stressing the larger role played by humans in shaping Amazonian forests), but also botanists and soil scientists, among other ‘hard scientists.’”

The paper brings together more than 80 years of research into both the ecology of the Amazon and the indigenous people who lived there. It collates data from two sources: the Amazon Tree Diversity Network, a long-running index of the animal and plant species who inhabit the rainforest; and a database of the archeological sites excavated around the Amazon.

These archeological sites include anything that suggests human influence: ceramics, earthworks, rock paintings, and mounds of dirt. It can also include anthropogenic soils, or “Amazonian dark earth,” a black mixture of charcoal and organic material that resulted from ancient Amerindian slash-and-char techniques.

Because it collates two different data sources, the paper also suggests areas of future research. It finds that certain areas of the Amazon are home to the types of tree species that indicate ancient human influence, but that these places have not yet been explored or excavated by academic researchers. “This tells archaeologists where to do new projects,” says Ariarte.

The paper also leaves unexplored whether certain types of archeological evidence—mounds of earth, say, or broken ceramics—correlate with certain species of tree. Why does this matter? Though conservationists still speak of the Amazon as a “pristine” region, Levis says that its environmental allies should talk about it differently. We can look to it, she says, as an example of how human influence can enrich the Amazon.

“Human societies increased the abundance and distribution of useful species. This can also be used to preserve the forest, I think,” she told me. “We can use this as an opportunity to reduce the impacts of deforestation. Now we have huge plantations of soybeans that are destroying the Amazon—while in the forest we have lots of plants that can be used while maintaining the forest as it is.”

A recent New York Times investigation found that deforestation of the Amazon is accelerating again after slowing during the mid-2000s. More than 850,000 acres of the basin are now burned and converted to farmland every year, releasing millions of tons of carbon dioxide in the process.

Some geographers, anthropologists, and indigenous people have all rejected the idea that the Americas were an untouched wilderness—“the pristine myth,” as they call this tale—since the early 1990s. (Fifteen years ago, it was the topic of 1491, Charles C. Mann’s article in The Atlantic, later a best-selling book.) But this paper further belies that myth in one of the most biodiverse places in the continent, suggesting that humans did not just farm in the Amazon but helped determine some of its major ecological communities.

The Science paper cautions that it’s unclear whether human-cultivated biodiversity shapes the ecology throughout the Amazon Basin or just certain sections of it.

But Iriarte said that increasing evidence shows that indigenous people were gardeners and stewards of biodiversity. “Perhaps,” he said, “the very biodiversity we want to preserve [in the Amazon] is not only due to thousands of years of natural evolution but also the result of the human footprint. The more we learn, the more the evidence points to the latter.”

ROBINSON MEYER is an associate editor at The Atlantic, where he covers technology.