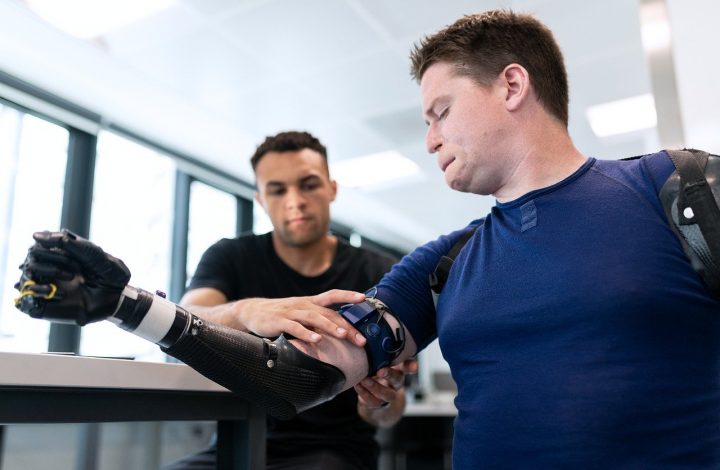 From the outside, it’s the most ordinary of garden sheds.
But hidden within is a state- of-the-art workshop where a brilliant designer makes prosthetic arms to help scores of children.
Inventor Stephen Davies was himself born without a left lower arm and never forgot the stigma of the NHS-issue prosthetic he wore as a child.

After several years of not using one, the 43-year-old, from Swansea, began looking at designs available on the NHS – only to discover they had barely improved in three decades.
More sophisticated bionic arms, which are not available on the NHS, can cost upwards of £30,000.
It makes a huge difference to children’s confidence
However, having learned how far lighter limbs could be created on a 3D printer, he began to experiment in his garden shed.
He has now set up Team UnLimbited, which creates customised ‘cool’ limbs for children, featuring their choice of colour and pattern.
The father of three said: ‘We’ve done Iron Man designs, Harry Potter, Lego and Spider-Man. The key is making something the child actually wants to wear and feels is cool enough to show their friends.

‘Sometimes children with prosthetics get bullied at school and something like this can make a huge difference to their confidence.’
The limbs work for children born without a lower arm. When the wearer moves their elbow, the fist closes, enabling objects to be grasped. Each arm costs about £30 to make, and takes a few days to print and assemble.
All are made in the shed which is insulated with solar-powered air-conditioning to keep it within the very narrow temperature range needed for the 3D printer to work.
Mr Davies – along with his partner, IT consultant Drew Murray, from Milton Keynes – never charge the children for the cost of the limbs, and have instead raised their costs through crowdfunding.

The first recipient was nine-year-old Isabella Jennings, from Bristol, who was born without a lower left arm.
A YouTube video of her unwrapping her pink limb has had viewed more than two million times.
Her mother Sarah, 37, said: ‘Before we heard about Stephen, Isabella had managed without a prosthetic, but it was always an option if she wanted one.
‘She volunteered to be a guinea pig, but when she saw the arm she fell in love with it and adores wearing it.’
Isabella said the best thing about her prosthetic was she was now able to read heavy books. ‘When I wore the arm to school, my friends thought it was so cool,’ she added.
The shed is on the shortlist for Cuprinol’s Shed of the Year competition, featuring on Channel 4’s Amazing Spaces, with the winner announced later this year.