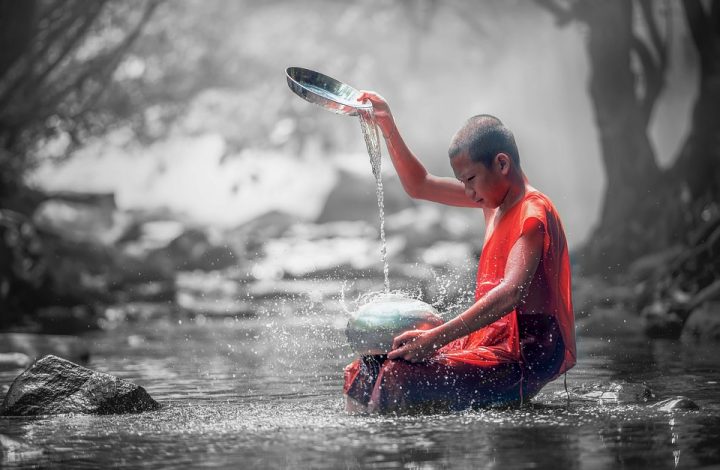 What can Zen Buddhism teach us about the art of effective activism in the wake of Donald Trump’s presidency?

Zen master Thich Nhat Hanh, who has been a social and environmental activist for more than 40 years, has said the most important thing for those feeling a sense of despair is to remember that meeting anger with more anger only makes matters worse.

The 90-year-old Vietnamese monk, who is considered to be one of the world’s leading spiritual teachers, is known for creating the idea of Engaged Buddhism, a method of linking mindfulness with social action.

His essential teaching on activism is that mindfulness gives people the ability to find peace in themselves so that their actions come from a place of compassion.

“Mindfulness must be engaged,” Nhat Hanh writes in his new book At Home in the World. “Once we see that something needs to be done, we must take action. Seeing and action go together. Otherwise, what is the point in seeing?”

“Nonviolence is not a set of techniques that you can learn with your intellect,” he goes on to say. “Nonviolent action arises from the compassion, lucidity and understanding you have within.”

Drawing from his own experience in seeking an end to the Vietnam War, Nhat Hanh writes that activists must learn to look after themselves if they are to be effective:

If we don’t maintain a balance between our work and the nourishment we need, we won’t be very successful. The practice of walking meditation, mindful breathing, allowing our body and mind to rest, and getting in touch with the refreshing and healing elements inside and around us is crucial for our survival.

The Huffington Post recently interviewed a nun and a monk at Nhat Hanh’s Plum Village monastery in France, to ask what advice they would give to activists who want to take action during Trump’s presidency.

Sister Peace, who previously worked in the office of the mayor of Washington, says action must be inspired by a deep-rooted sense of love.

“If we can be strong in ourselves, then we could offer a resistance that is nonviolent,” she said. “But that means that we ourselves are at a place where we can have that recognition and we can offer that to another. And that is a great, great source of love and having the other feel they’re being recognized and listened to and embraced.”

She says that those who are passionate about taking action should learn from the nonviolent approach of the civil rights movement.

Referring to the 1965 march from Selma to Montgomery, Alabama, during which marchers remained passive despite being chased and beaten, she said: “They were taught how to be quiet, how to be still, how not to resist and fight back no matter what happened.”

Brother Phap Dung, a monk at Plum Village who was previously an architect based in Los Angeles, is equally clear that while anger can bring about change, it can ultimately lead only to more conflict. He points out that this is equally true in our personal lives as in the fate of a nation.

He suggests that in the face of aggression or discrimination, it can be helpful to first sit and find your center, rather than immediately reacting to events.

“Non-action sometimes is very powerful,” he said. ”Sometimes we underestimate someone sitting very calm, very solid and not reacting and that they can touch a place of peace, a place of love, a place of nondiscrimination. That is not inaction.”

Phap Dung also points to the Buddhist teaching of interdependence: that people we perceive as our greatest enemies can be our greatest teachers, because they show aspects of ourselves that we find unpalatable and give us the chance to heal.

“We have the wrong perception that we are separate from the other,” he said. “So in a way Trump is a product of a certain way of being in this world so it is very easy to have him as a scapegoat. But if we look closely, we have elements of Trump in us and it is helpful to have time to reflect on that.”

This idea of finding Trump within ourselves was also echoed last week by James S. Gordon, a psychiatrist as well as the founder and executive director of The Center for Mind-Body Medicine.

He wrote a comment piece in The Guardian, arguing that “Trump’s grand and vulgar self-absorption is inviting all of us to examine our own selfishness. His ignorance calls us to attend to our own blind spots. The fears that he stokes and the isolation he promotes goad us to be braver, more generous.”

The nonviolent approach of Thich Nhat Hanh, who is currently recovering from a stroke, was honed during the Vietnam War, when he created the School of Youth and Social Service, a grass-roots relief organization of thousands of volunteers who travelled to war-stricken remote villages to bring humanitarian aid.

Nhat Hanh also formed a friendship with Dr. Martin Luther King Jr. and was instrumental in encouraging King to speak out against the Vietnam War. In 1967, King nominated Nhat Hanh for a Nobel Peace Prize.

“It would remind all nations that men of good will stand ready to lead warring elements out of an abyss of hatred and destruction,” King wrote of recommending Nhat Hanh for the award, which Nhat Hanh ultimately did not receive. “It would re-awaken men to the teaching of beauty and love found in peace. It would help to revive hopes for a new order of justice and harmony.”

That same year, King delivered a speech to the Southern Christian Leadership Conference, extolling the power of love in a way that Nhat Hanh’s teachings still echo in the 21st century.

“I know that love is ultimately the only answer to mankind’s problems,” King said. “I’m not talking about emotional bosh when I talk about love; I’m talking about a strong, demanding love. For I have seen too much hate. … I have decided to love.”