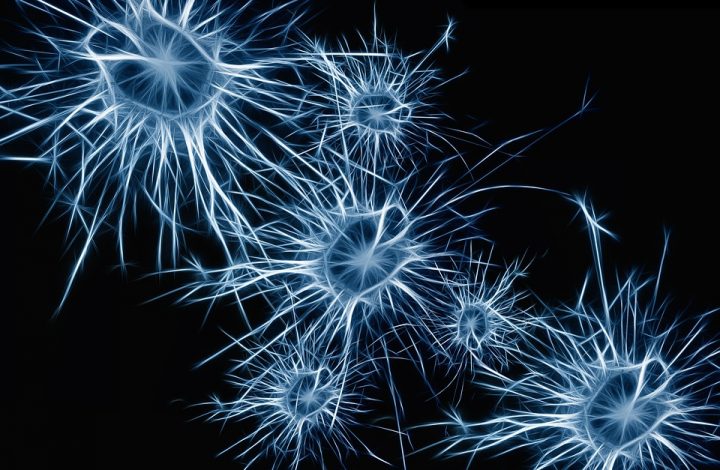 Like ivy plants that send runners out searching for something to cling to, the brain’s neurons send out shoots that connect with other neurons throughout the organ. A new digital reconstruction method shows three neurons that branch extensively throughout the brain, including one that wraps around its entire outer layer. The finding may help to explain how the brain creates consciousness.

A digital reconstruction of a neuron that encircles the mouse brain.

Christof Koch, president of the Allen Institute for Brain Science in Seattle, Washington, explained his group’s new technique at a 15 February meeting of the Brain Research through Advancing Innovative Neurotechnologies initiative in Bethesda, Maryland. He showed how the team traced three neurons from a small, thin sheet of cells called the claustrum — an area that Koch believes acts as the seat of consciousness in mice and humans.

Tracing all the branches of a neuron using conventional methods is a massive task. Researchers inject individual cells with a dye, slice the brain into thin sections and then trace the dyed neuron’s path by hand. Very few have been able to trace a neuron through the entire organ. This new method is less invasive and scalable, saving time and effort.

Koch and his colleagues engineered a line of mice so that a certain drug activated specific genes in claustrum neurons. When the researchers fed the mice a small amount of the drug, only a handful of neurons received enough of it to switch on these genes. That resulted in production of a green fluorescent protein that spread throughout the entire neuron. The team then took 10,000 cross-sectional images of the mouse brain and used a computer program to create a 3D reconstruction of just three glowing cells.

Well connected
The three neurons stretched across both brain hemispheres, and one of the three wrapped around the organ’s circumference like a “crown of thorns”, Koch says. He has never seen neurons extend so far across brain regions. The mouse body contains other long neurons, such as a nerve projection in the leg and neurons from the brainstem that thread through the brain to release signalling molecules. But these claustrum neurons seem to connect to most or all of the outer parts of the brain that take in sensory information and drive behaviour.

Koch sees this as evidence that the claustrum could be coordinating inputs and outputs across the brain to create consciousness. Brain scans have shown that the human claustrum is one of the most densely connected areas of the brain, but those images do not show the path of individual neurons.

The claustrum is a good brain region in which to test the new technique because it has been extensively studied in mice and consists of only a few cell types, says James Eberwine, a pharmacologist at the University of Pennsylvania in Philadelphia.

Taking stock
“It’s quite admirable,” Rafael Yuste, a neurobiologist at Columbia University in New York City, says of the method. He doesn’t think that the existence of neurons encircling the brain definitively proves that the claustrum is involved in consciousness. But he says that the technique will be helpful for census efforts that identify different cell types in the brain, which many think will be crucial for understanding how the organ functions. “It’s like trying to decipher language if we don’t understand what the alphabet is,” he says.

Yuste and Eberwine would like to see 3D reconstructions of individual neurons compared to analyses of the genes expressed in those neurons. This may offer clues as to the type and function of each cell.

Koch plans to continue mapping neurons emanating from the claustrum, although the technique is too expensive to be used to reconstruct all of these neurons on a large scale. He would like to know whether all the region’s neurons extend throughout the brain, or whether each neuron is unique, projecting to a slightly different area.