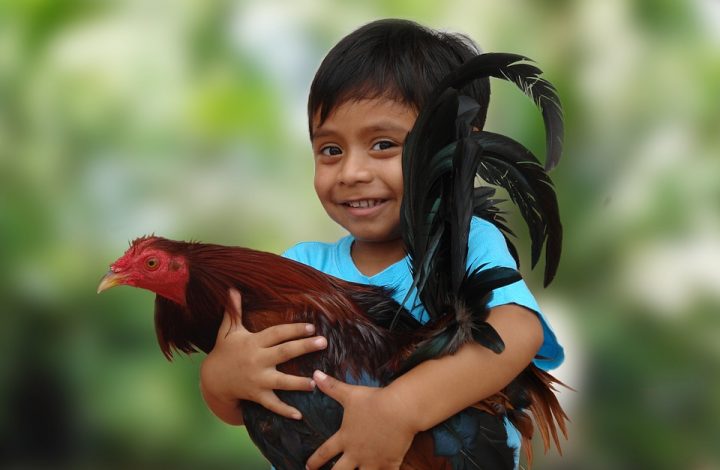 Lunar New Year is a vibrant celebration steeped in layers of myths and traditions.

The holiday falls on Saturday this year and marks the beginning of the Year of the Rooster. Although it’s commonly known as Chinese New Year, or the Spring Festival, in China, it’s celebrated in many countries throughout Asia, including Japan, Korea, and Vietnam. Celebrations also take place in other parts of the world where people with Asian heritage have settled. It’s also a time for families to come together to eat good food and participate in cultural traditions. Here’s what you need to know about this celebration.

1. The holiday’s fireworks and fanfare are rooted in an ancient myth about a wild beast.

The date for Lunar New Year depends on the lunisolar calendar, which charts time based on the movements of both the moon and the sun. On the Gregorian calendar, the holiday will generally fall between Jan. 21 and Feb. 20. The festival reportedly traces its origins to the Shang Dynasty (between 1600 BC and 1100 BC), when people offered sacrifices to gods and ancestors to mark the end of an old year and the beginning of a new year. A legendary wild beast named Nian (or “year”) was thought to attack people at the end of the old year. Villagers would use loud noises and bright lights to scare the creature away, a practice that slowly morphed into the Lunar New Year festivities. 2. According to legends, the Chinese Zodiac can be traced back to a celestial race.

While the Western zodiac system is divided into 12 months, the Chinese zodiac is divided into 12 years. Each year is associated with an animal: rat, ox, tiger, rabbit, dragon, snake, horse, sheep, monkey, rooster, dog and pig. People are said to be influenced by the personality of the animal that rules their birth year. There are a number of legends that tell the story of how the years were ordered. In one legend, Buddha called all the animals of the world to him before he left the earth. The only ones that listened were these 12 animals, so Buddha named a year after each of them in the order that they arrived.

Another legend has the animals racing to see the Jade Emperor, which some Chinese traditions consider to be the ruler of Heaven. An old ox was in the lead, but he was a kind animal and when he saw a rat trying to cross a river, he stopped to help. But the rat was cunning — just when they were about to climb onto the shore, the rat jumped off the ox and ran to the finish line, becoming the first animal in the cycle.

This is the Year of the Rooster, the tenth animal in the cycle. In Chinese folklore, roosters have been seen as the timekeepers, the ones who herald the beginning of a new day. In general, roosters are said to be hard working and energetic. Each year is also assigned an element, such as gold, wood, water, fire or earth. This year’s element is fire. The last Year of the Fire Rooster was 1957. People born under this zodiac sign and element are believed to trustworthy and responsible.

Although Lunar New Year is rooted in folklore, in recent decades the holiday has become a largely secular, cultural celebration. Still, it’s a time when many people engage with beliefs about the supernatural, and think about building up good luck for the year to come. Some families avoid doing certain things to make sure that they don’t unwittingly set a precedent for the entire year. For example, people won’t wear old, damaged clothing, so as not to carry bad luck into the new year. Some families try not to wash laundry, handle knives, or take out the garbage on this day to make sure they don’t throw their good fortune away. Others believe it’s mandatory to stay up late to welcome the new year.

5. It’s also one of the world’s greatest annual migrations.

It’s customary for adult children to travel home to be with their families during the holidays, particularly for the biggest celebration, which falls on New Year’s Eve. This tradition leads to one of the world’s greatest annual migration of people. It’s a massive travel season in China. In 2017, travelers were expected to make almost 3 billion trips between January 13 and February 20. The Chinese government has instituted a weeklong public holiday to celebrate the new year, giving people the chance to return to their hometowns or take vacations abroad. 6. The New Year is a time for families to come together.

The 15 days of New Year celebrations are filled with cultural activities. The most important meal is the one that falls on New Year’s Eve. Families will eat traditional foods on that day, such as rice cakes, tangerines, fish, long noodles, and dumplings. Parents give their unmarried children red envelopes filled with money, called hong bao, during the holiday. The color red is a symbol of good luck in some Asian cultures. People will decorate their homes with lanterns and paper scrolls. Some communities organize cultural celebrations, which include dragon dances, parades and firecrackers.

There is plenty of regional and national variety in the way Lunar New Year is celebrated across Asia. In Korea, the festival is called Seollal. Along with rituals to express respect to a family’s ancestors, Koreans eat tteokguk, a soup flavored with beef, egg, vegetables, and rice cakes. This tradition is believed to add a year to one’s life. In Vietnam, Lunar New Year is called Tet and an important part of the festivities is decorating the home with flowers.

8. The festivities end with a lantern festival.

In China, the celebrations end on the 15th day of the new year with the Festival of Lanterns. Some believe that this is the birthday of Tianguan, the Taoist god of good fortune. Others say that the lanterns are related to a legend about the Jade Emperor, who became incensed after humans hunted and killed his favorite crane. He planned to send a firestorm to destroy the village that was responsible. One man suggested that villagers hang red lanterns outside their houses, which helped trick the Jade Emperor into thinking that the village was already on fire.